At Hotel Saratoga, belonging to the tourism company Habaguanex SA and symbol of Cuban hotels, was awarded an official ceremony held on Friday November 13 the title of Leader of the Collective Quality, awarded by the National Union of Hotels and Tourism in salute to its 20th anniversary.

Highlight, encourage those groups that in the tourism sector have achieved a superior category recognized by foreign companies and agencies of national and international travel that place, according to customer feedback, these spaces as top rankings in the country is the target This Leader Award for Quality, obtained by the Saratoga. Within a rigorous assessment - conducted by the National Union of Hotels and Tourism in conjunction with the Ministry of Tourism and that included 120 proposals for individual character and 62 groups - this beautiful hotel, located right near the beginning of the Havana Prado, was selected the results achieved in the past year. In the words of Marco Cardillo, CEO of Saratoga, "the work of all those who compose the Saratoga, the work of the day, even hours spent outside our homes has been awarded; this effort has been recognized and I think that's because we love our hotel.

READER'S TRAVEL AWARDS 2009 Hotel Saratoga: No.16 in the Americas and Caribbean category

The Saratoga Hotel is ranked 16th place among the 100 best hotels in the category America and the Caribbean, from Condé Nast Traveller, according to results of Readers' Travel Awards 2009, to be published in the next issue October of this important British magazine, which can also be read on their website.

This position is the result of the vote of the readers of the Journal, which is asked to nominate a questionnaire its preferred geographical area, in design, hotel facilities, food, location, rooms and service, from over 7000 hotels to it for consideration. This recognition adds to also awarded by Condé Nast Traveller in 2006, when the Saratoga Hotel peaked at 24 in category 60 Best New Hotels in the world, the Hot List 2006 ("The Hot List 2006"). 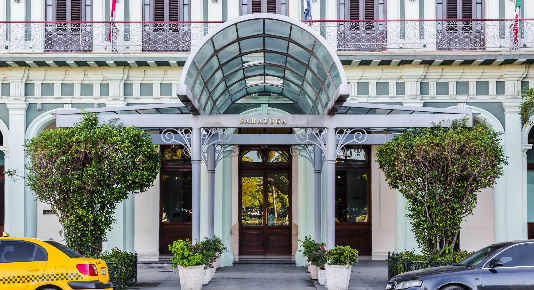 With these words reads the plaque, cast in bronze by the Spanish sculptor Antonio Grediaga and it was unveiled by Aitana Alberti, the daughter of two writers, along with Cuban poet Angel Augier. An initiative with the participation of the Cultural Center of the Generation of '27 Málaga Provincial Council, the Office of the Historian of the city and the Department of Culture Andalusian University of Havana. A plaque commemorating the stay of Spanish writers Maria Teresa Leon and Rafael Alberti in the Hotel Saratoga in Havana during the spring of 1935.